Harrier of the Month, November

The HoM awards went to Brit Tate and Rob Cunningham. Congratulations to them. They will receive technical running shirts from HoM sponsor UP & RUNNING.

Another super event, 275 juniors running (numbers a little lower! than normal due to the snow) and a great morning's activities organised by BRPC. Results etc. on the Junior Pages

Those who know Lawrence & Jemma (Lawrence organises the Trail Race) will be pleased to note that Hope Ava Basham was born at 9.51am on Fri 19th Nov, weighing in at 7lbs 13oz. Everyone well.

Henry Heavisides reports ... The Abbey Dash again produced ideal conditions for running a fast 10k. This year there were 8 runners under 30 minutes, which must make it one of the quickest 10k's in the country. Ilkley Harriers were well represented, with Jamie Hutchinson being our 1st finisher in 35:19 (chip time).
In the Category results, Geoff Howard was 2nd M65, Ken Souyave 1st M60 (gun position), Alison Bennett 2nd F45. I had a real battle with Shaun Jordan of Bingley, he beat me by one second on gun time & I beat him by 1 second on chip time, we were 1st & 2nd in the M55 category (I should start nearer the front next year!). (I managed to beat my M55 Club record.)

The official results (www.raceahead.co.uk) didn't originally show clubs, we think we've got everyone now but if you're not listed here let us know your chip time and posn please.

In the Category results, Geoff Howard was 2nd M65, Ken Souyave 1st M60 (gun position), Alison Bennett 2nd F45. I had a real battle with Shaun Jordan of Bingley, he beat me by one second on gun time & I beat him by 1 second on chip time, we were 1st & 2nd in the M55 category (I should start nearer the front next year!). (I managed to beat my M55 Club record.)

From Chris Matthews ... I ran the Preston 10 mile today in perfect conditions, on a well organised 2 lap course. Didn't see any other Ilkley vests so apologies if not included, (however appreciated support from Di Haggar, spectating).

This is a new Club record.

We hear that Tom Adams was 2nd (running) in 34.15 to Rob Jebb who set a new record on a bike 32.19. Tom Adams was the only runner in the first 6 finishers (Ian Holmes was 6th on a bike). These photos give a taste of the race. Also, there are videos, full results, and discussion on the FRA Forums.

Diane Haggar reports ... a great turn out of 11 ladies at Bramley Park. Good to see Sally Morley heading the team with an outstanding 8th placing. Our best team placing so far, 4th, with Emma Barclay, Rachel Wolfenden and Alison Bennett scoring. Thanks to all for turning out and well done to Sheena for completing her first ever cross country.
Just one more league race to go on Dec 5th at Thones Park Wakefield, plus the Yorkshire Championships on 9th Jan.
Also don't forget the PECO League for a more Trail type experience with men & ladies running together.

There were also 24 juniors racing, report later on the Junior Pages

Emma Barclay reports ... This was the first time the Dalby Dash was run. A well organised event, starting in the Dalby Forest at the Visitor Centre. The course started uphill for 3km on tarmac, the first gent and lady to the top of the runnable hill were awarded with king/queen of the hill prizes. From the 3km mark the course followed trails around the Dalby Forest. A very enjoyable day out for all the family. I was 3rd lady and 1st lady vet in a time of 41:24. It was great to see 2 youngsters winning the Ladies and Mens race. Full results on John Schofields website. The event will be run on Remembrance Sunday again next year.

Henry Heavisides reports ... I was 1st reserve for the England M55 team fo the British & Irish Cross Country Internationals, but unfortunately didn't get into the main race, so I ran in the 6k Open race for reserves & other vet runners. I finished in about 20th place, although I've not seen the official results yet. England won the overall men's & ladies team events as well as many of the individual & age category team races. I t's a great event & well worth the trip to Dublin to be involved in a big International race weekend. Next year the Internationals are being held in Glasgow & I'm sure that 4 or 5 Ilkley Harriers could make it into the England team if we run in the right qualifying races. The standards at the sharp end are quite high....for example Mike Hagar of England who won the M60 race has a sub 34 minute 10k road time this year!

Jim & Lyn report ... the last race in this year’s Yorkshire Vets AA Grand Prix Series was held at Spenborough Athletic Club on Sunday. Approx 5.5 miles multi-terrain race starting and finishing on the athletics track with road, trail, fields and a couple of hills making a very enjoyable run, especially all the mud in the fields. A record turnout for the Yorkshire Vets Grand Prix with 219 runners

A full roundup of the English Championships results was given earlier, see here.

Jez Hellewell says ... What a beast ! 17 miles, with 5000 feet of climbing. With two thirds of that climbing coming in the last third of the race. The last climb was a killer with pained expressions on everybody's faces. The weather wasn't too generous either. Wind, rain, sleet, proper fell running conditions. Saw Steve Weston & a couple of other Harriers (sorry I fogot your names in the pre race excitement) on the start line. I stumbled home in 3 hours 14, around 3/4 of an hour behind the winner, James Logue (from Calder Valley, I think). Not sure of positions/times of fellow Harriers as the results are not out yet. I will post these as soon as I get them.

Steve Weston adds ... The Tour of Pendle delivered everything, mud, hair-raising decents, quad busting climbs and weather in adundance.... sun, fog, rain and hail. Jez Hellewell, Paul Sowden and Graham Arthur were the other Harriers running. I managed to pace myself better this year and knocked off 20 mins off my previous time with 3.39.11. James Logue was first in 2.27 ! 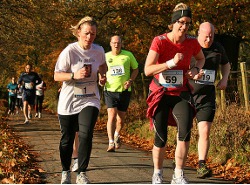 What a super day! Over 50 Harriers raced, and over 30 helped, in this road race to raise money for the Ben's Wish To Walk appeal. Subject to final accounts, we believe that we've raised over Ł1800 for the charity. Thank you to all the runners, 176 entered, about 70 of them local unattached runners supporting this great cause. Thank you to the ace Ilkley Harriers catering team and all those who donated delicious food. And thank you to the great team of helpers - another succesful Ilkley event achieved, thanks to your support. Results and photos on the Ben's Run page.

This was a counter in the Ilkley Harriers Race League

Proving that you can have your delicious cake and eat it at Ben's Run, and field a few runners at the first race in the PECO XC League the same day, Ilkley sent a few runners, some of them not seen on a XC field for some time, to distant Ackworth ...

A pair of trainers was found in the Car Park after - anyone go home shoeless? Contact Paul.

We hear that Tom Adams had a great race with Ian Holmes, swapping the lead, and both over a minute clear of a quality field. 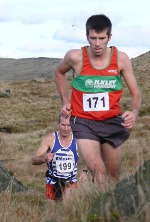 Bob Hamilton reports ... Despite all the other racing attractions this weekend, I felt compelled to give this new local fell race some support. Despite their lack of experience, the organisers laid on an excellent event, over a very natural and well-marshalled course taking in a loop of the eastern side of the moor. It was fine to enter on the day, and for once I was rewarded for my lack of organisation by only having to pay Ł2.50! It meant I didn't get to pick up the rather attractive T-shirt, but I ran out of cupboard space for those years ago.
There was a very strong community feel to the race, with a healthy mix of local fun runners and 'proper' fell runners. A good sprinkling of Ilkley vests were on show throughout the field so the club has certainly done its bit to support the event on what was a very busy weekend. I very much hope it becomes an annual fixture. I presume that results will be available at some point, but they don't seem very important in the context of such a lively social occasion!

Did you run? There's a list of finishers, race numbers and times but no names, on Otley AC's site here. Let us know your result?

Rob Cunningham was 10th in 18:20 in the South Manchester event.

Over 460 Primary Schools children ran in the race organised by Westville House School and assisted by Ilkley Harriers. More on the Junior pages.