Harrier of the Month, August

The HoM awards went to Jez Hellewell and Justin Phillips. Congratulations to them. They will receive technical running shirts from HoM sponsor UP & RUNNING.

Additionally, an Outstanding Achievement Award was made to Norman Bush.

Jez Hellewell reports ... had a great afternoon out at Kilnsey Show. As usual the junior races went first with Wharfedale Harriers dominating on a hot afternoon. Then it was a question of whether Rob Hope could win the senior race for a record 8th time, which he duly did. Ted Mason was a close 2nd.

David Howe reports ... Did this on BHM – quite warm and dodgy underfoot in places after repairs to potholes around the route – but a nice event for the family with stalls and entertainment at the gala on the village green.

From Rachel Wolfenden ... We had a good run at Fleetwood yesterday despite very windy conditions and being subjected to sandblasting when running next to the sea.

Jamie Hutchinson reports ... I raced in this 1000m swim, 20k mountain bike, 5k run event organised by Paul Drinkwater (www.ukmtbtri.co.uk) . A small field of 35. Had my usual steady swim (two laps of a lake) and out in about 20 minutes, a quick change into my trail shoes to run 1k to transition to get us over to the biking area. Mountain biking around a disused mines area – a lot more fun that it sounds, had plenty of everything. A few technical bits, uphills and plenty of tramming it. On to the run and two laps of the lake we’d swum in. I finished in just over two hours and fourth overall. The event was won in 1 hour 51 minutes.

Amanda Parnaby reports ... on this LDWA event, 26 miles from Fylingthorpe Village Hall at Robin Hoods Bay, taking in parts of the North Yorks Moors. Dry under foot but very breezy and a couple of sharp showers. Completed in 6 hrs 40 mins. 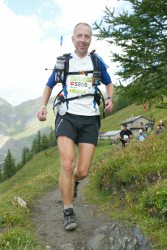 Morgan Williams reports ... I set off in the CCC (Courmayeur Champex Chamonix race, 100 kms and 6,000 metres) from Courmayeur at 10.00 am on 27 August. The forecast was poor and so it proved. We started in a huge thunderstorm. To cut a long story short, the weather became severe through the late afternoon, evening and night. The organisers halted the race sometime between 3.00 and 5.00 am on Saturday morning due to the shocking weather and the truly appalling ground conditions. I received this news at Vallorcine at 5.30 am by which time I had run 82 kms in 19 hours 30 and was ready to head over the last section in time to finish in Chamonix well under the 26 hour limit. The UTMB itself (with Heather Dawe and Brian Melia competing) was stopped after about 3 hours and the TDS never started. More detailed report to follow in the next newsletter.

Jules Carter reports ... I work for a Danish firm who sponsor a 5.3 and 8.8 km run in the town of Lemvig. Lemvig is a fishing village surrounded by hills in all directions and the longer race involved running from the fjord to the top of the town and back again 3 times. Due to the hills this was not really a race to enjoy but one to endure. However, I managed to finish 12th in the 8.8km race quite a big field in 34:14. More importantly, I was the first person in our company home so the UK office regained the bragging rights.

Jez Hellewell reports ... had a great day out today in Swaledale with my son Jacob for The Reeth Show. He's 10 and ran in the under 12's race. He ran extremely well and came home in 7th in 10.13 mins. I came 5th in the seniors race in 19.06 mins. The winner, Andy Preedy from Rossendale Harriers, did it in 18.24

Val Kerr reports ... A beautiful afternoon for fell running saw nearly 150 runners set off from the green in Burnsall for the flag at the top of the fell. Conditions were good underfoot except for the descent which was a bit slippery in places. This was my first Burnsall Classic, having been persuaded to do it by Alison W, and I thoroughly enjoyed the experience. A nice fast descent (although nowhere near the record of 2 min 42 secs) left me feeling like a real fell runner. Tom Adams had a great race finishing in third place, just behind the legendary Rob Hope and Ian Holmes. Thanks Alison for the recomendation.

Jez Hellewell reports ... Being on holiday in North Yorkshire, I decided to give this race a go. Finished 18th in 55.21. Not sure what the winning time was. Great race with a brutal climb 1.5 miles in. Didn't see any other Harriers, unsurprisingly !

Jim Towers reports ... At Oxspring, Sheffield, 4.25mile with 550ft of climb. 8th race in a nine race series. Lovely evening for running. Very firm under foot, and little water in the three river crossings. Perfect conditions for a PB and the holiday season meant that the number of runners was smaller and hold-ups at the stiles earlier in the race less than normal. Or maybe I am fitter than I think I am because I did a PB, having run the Trunce 8 times previously. Whatever the reason a PB at my age is well appreciated.

Harrier of the Month, July

The HoM awards went to Rebecca Mon-Williams and Alison Weston. Congratulations to them. They will receive technical running shirts from HoM sponsor UP & RUNNING.

Additionally, an Outstanding Achievement Award was made to Henry.

From Alison Eagle ... beautiful Swiss valley and a classic race - 31 km, 2200 metres ascent and 800 descent. Unfortunately like many other classic races on the continent now it has become very popular, which meant getting stuck in lines of people at times, esp if you don't want to set off at sprint pace! Thanks to my friend Sarah from Abbey for towing me round as I struggled with stomach cramps. Managed 4.25, 53rd lady and 16th V40.

From Janet Grace ... Well, this was it - I've been building up to doing an Ironman-distance event since I first dipped a toe into triathlon waters with the Ilkley sprint-distance race in 2007. At 6AM we were off - with a mass start of the 800+ competitors in the rowing lake at Holme Pierrepont. I managed to pick my way through the thrashing throng (without getting punched or kicked) and finished the 2.4 mile swim in 1:21:01. Then on to the bike, which was a three-lap "gently undulating" course through the Nottinghamshire countryside. I'd been warned to start easy and really hold back during the bike leg. I stuck to plan and finished the 112 mile ride in 6:42:57 with legs intact. So far so good, but then it dawned on me that I was just about to start a 26.2 mile run! I managed some steady 9- or 10-minute miles until about mile 18 when I hit a real low. I forced down some energy gels and gave myself a very strong talking to - then bounced back and finished with a massive smile on my face. I did a personal worst marathon time of 4:30:39 but I was absolutely delighted with my overall finish time of 12:49:14. I can't really believe that it's all over ... until I move. Everything hurts today!

Full results and photos on woodentops.org.uk

Eric Morley reports ... On a lovely evening for running Halifax Harriers presented a testing run with 64 participant from the Mytholmroyd Community Centre.

Sarah Fuller reports ... A few Harriers were out and about at the Round Hill fell race on Sunday. The route is basically a steady climb on the forest track from the Timble crossroads along the moor, across some man-eating (but relatively dry on Sunday) bogs to Round Hill, a fantastic descent towards Wharefedale, followed by some more relatively flat fast running before a final steady climb back to the finish. Well marked and marshalled with even a (very welcome in the warm weather – thanks Bob!) drinks station. Having been mostly training for long slow things (oh and also a general lack of ability!), I struggled to stay with the early fast pace and finished in a slightly disappointing position just hanging on the back of the main field. Nonetheless thoroughly enjoyably and was pleased with my time of 1 hr 27mins (was aiming for under the hour and half!) for this 9 mile 1,100ft effort. Some great results from the men. If anyone looking for a good first fell race then this would be a good choice. 118 ran.

Vic Verecondi reports ... went for a drive today to Lancaster and ran a nice 10 mile race... Well marshalled and plenty of drink stations... A pretty flat course with a couple of undulations and one hill... Nothing major I would say... Anyway came 68th in a time of 75 min and 18 secs... Pretty pleased all round with my effort... Would recommend for a potential pb..

Justin Phillips reports ... 1,000 runners took part in the 2nd Thunder Run 24 at Catton Park Nr Lichfield and I was lucky enough to be one of them. Competitors have 24hrs to complete as many laps of a 10k trail route in relay teams of two, five, eight or for the totally unhinged...Solo! The challenging course was brilliantly planned out with hills, twists n’ turns, woods, great views and plenty of points for your team mates to cheer you on. There was a festival atmosphere amongst the tented village, event catering provided tasty carbs whilst the toilets and showers were better than I have in my house!
A last minute decision (Wednesday!) to enter with Josie from Otley saw us join a scratch team of other last minute entrants from around the country who I’d now class as friends for life. The event was so far removed from my normal diet of 10k road races I still can’t quite believe I’ve done it.

Leg 1 14:00hrs - The mass start and the biggest cheer I’ve ever experienced for the start of a race (41mins)
Leg 2 21:30hrs – Dusk and the 1st opportunity to test out my head torch (41mins)
Leg 3 02.30hrs – Utterly surreal and what this event is all about, the start/finish area packed with people. Battling my body clock and trying not to get lost in the woods (44mins)
Leg 4 08:00hrs – My legs were shot to bits but at least it was light and I’d been promised a bacon and egg butty at the end of it (44mins)

For the record the leading solo competitor completed a mind boggling 20 laps, that’s 126 miles in 24hrs. My team came 4th in our category and 5th overall out of over 100.
Without doubt this was the best running experience I’ve ever had. It’d be great to get a Harriers team or two out for this next year, it’s a fantastic opportunity to bond and indulge in all things running related. We most certainly have the endurance athletes in the club to excel at this event. Send me a message via the forum if you’re interested.
For more info www.tr24.co.uk