A host of Harriers in this, a counter in the

Terry Lonergan reports ... "4300 runners dropped to their knees on Saturday night praying that the prevailing gale force winds would abate for the following day's race. Their prayers were only partially answered as a very troublesome wind served to hamper the progress of over 3000 eventual starters for 2/3 of this major race; reputed to be one of the fastest courses in the U.K.
One Harrier taking up the challenge was Terry Lonergan. Running his 78th half marathon, he finished 152nd out of 3241; 4th of 273 in the 50/59 age category; time being 84.57, averaging 6.29 per mile."
Andy Wiggans was 514th in 1:35:04, Bob Wightman 746th in 1:40:00 - there were 3241 finishers.

Not having entries to the Half Tour of Pendle and lured by the prospect of lunch in a cafe in Hebden Bridge Jo and Jim ran the Midgley Moor Fell Race in Calderdale (AS 5 miles, 1250ft). 49 hardy, or perhaps I should say masochistic, competitors set off to battle with the weather, which at times made it difficult to stand upright let alone run and led to slower times than previous years! Having only just made it on time after navigational challenges on Calderdale's country lanes, JCBs and tractors we discovered that there was a choice of route as long as 6 checkpoints were visited. After such a display of navigational skill in the car Jo elected to follow the man in front! Jim finished 5th in 46.20 and Jo was 24th and 1st lady in 55.17. Oh, and lunch made it all worthwhile!

Neil Chapman was the only Harrier at Hull 20, where the conditions were not good, with strong winds and some rain, but he ran a PB of 2:11:07

Vic Verecondi reports ... The weather was very rainy and windy which proved slightly difficult at times. An interesting course around Stanley Park. The race course was of two laps with small parts of the race on an athletics track. Finished 91st out of 395 runners and achieving a PB of 44:57. Quite pleased with the time.

Andy Wiggans was 126th out of 344 in 69:06 - and actually led the race for a short way after half the field turned the wrong way just after the start!

It was interesting too to see past and present winners of our own Ilkley Moor fell race in such close contention: Simon Bailey was 2nd, Rob Hope 3rd

Full results on the

Only one Ilkley roady, namely Andy Wolfenden, turned up for this otherwise popular event with 655 runners. A sunny day with a crisp northerly wind together with an excellent traffic free course along the sea front made for an enjoyable bracing seaside race. Andy was 217th overall and 8th vet 55 in 1h36:56

Thanks to all the Harriers who helped make this year's fell race such a great event. We had a record field, with 281 Senior finishers including 30 Harriers, and nearly 70 Juniors, yet everything ran smoothly. We witnessed Simon Bailey set a superb new course record (the old record had stood since 1998), and there was a pleasant, friendly atmosphere that everyone enjoyed.

Harriers and other photos.

More photos, with thanks to Peter McWilliam.

In bad weather, Suzanne Akeroyd ran her fastest ever 10 mile race in 69:55, for 158th place, at Pocklington

Peter Cooke reports ... The final race in the Sports Direct Cross Country League was held on Sunday 15th February. Based at the South Leeds Stadium the 5-mile race was over a very pleasant and interesting woodland course. Ilkley ladies were hoping to maintain or improve on their position in the league. The team were led home well by Helen Sedgwick in third place who was well supported by Alison Bennett in 6th place and Alison Eagle in 7th. Following and packing well were; Elizabeth McCann, Suzanne Bickerdike and Barbara Bullock in 31st, 32nd and 33rd places, Shirley Wood in 45th, Chris Porritt 51st and Amanda Parnaby 62nd. The initial results indicate that Ilkley have finished second overall to Horsforth in both the ladies and ladies vets competitions.
The men responded to pleas to support their Club and dragged themselves from their sickbeds and warmdowns from previous days races to ensure a full team competed. The results were Graham Pearce 13th, Jonathan Sage 33rd, Rob Reynolds-Jones 41st, Jeff Paget 53rd, Dennis Ackroyd 67th, Paul Wood 68th, Neil Chapman 73rd, Peter Murray 74th, Peter Cooke 87th and Morgan Williams 95th. For the men, the initial results suggest a 5th place finish with 6th in the veterans competition.

Peter Cooke reports ... The 20 mile long Wadsworth Trog race was run on Saturday over the Pennine hills above and around Hebden Bridge. Rob Jebb of Bingley Harriers was the winner in a new course record of 2 hours and 42 minutes. There were some excellent performances from the competing Harriers with Roy Ruddle 22nd in 3.28, Ian Marshall 30th in 3.37, Ashley Hardwell 42nd in 3.45, Rupert Kempley in 3.45, Bob Wightman 68th in 4.01 and Neil Chapman 71st in 4.02. In the Half Trog, run in conjunction with the full event, second claim members Jason Hemsley and Stefan Macina were 2nd and 3rd in 1.14 and 1.15 respectively.

A great turnout of Harriers for this glittering occasion. The ILT&SC bar provided a congenial venue - a good old chat was followed by an excellent curry supper, the awards presentation presented at a great pace by Chairman Richard Gray, then a chance to strut your stuff om the dance floor.

Most of the prizewinners are in the photo, below 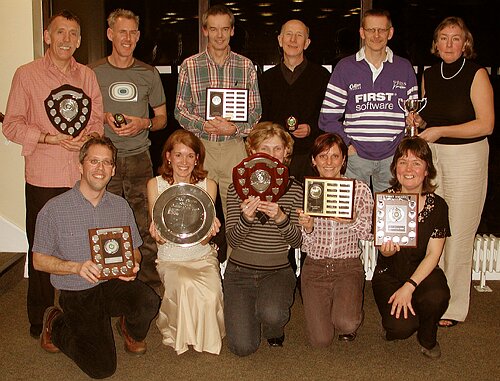 Terry Lonergan reports ... A dry and bright morning sparked an optimistic approach to a new race - the CHERNOBYL 10K (near Preston - 75 minute journey - no passport required!!)
Any roadrunner put off this event by the advertised description of "Trail" need not have worried. It proved to be 100% road - mainly flat and attractively mainly traffic free on tarmac paths.
The strong winds would work against improved finishing times and so it proved with the 2 Ilkley Harriers content with their "solid" performances, with the hope of better conditions to come. For the record Terry Lonergan was 41st 39.44 (4th O/55); Catherine Wolfenden 106th 43.43 (7th Female overall). 384 finished.
Not a PB course but none the less well worth the journey.

This was a counter in the

The events for 2004 were decided at the February C'tee meeting -

The 3 Ilkley Harriers"club places" in the

London Marathon have gone to Andy S, Dominic and Rebecca - good luck to them!

Vince Gibbons was the sole Ilkley Harrier in this event, indeed the only Harrier racing this weekend it seeems! In what used to be known as the Dewsbury Classic 10k, Vince ran a PB of 45 minutes dead for 277th place out of 657 finishers.

A raffle after the race raised over £60 for the

Junior results & photos on the

Terry Lonergan reports ... Phil Chappell's monumental efforts over the previous week in bringing a team to the start line proved successful when the club recorded a full team score for the first time in several years. First Harrier to complete the arduous 12km parkland course which offered very little firm going was JIM RYDER (234th in 51.16); NICK PEARCE (V50) (311TH in 52.51) was one stride ahead of the closing TERRY LONERGAN (V55) 312TH in 52.52. 300 places down on his finishing position 40 years ago!! but pleased none the less. An isolated JON SAGE was 408th in 56.26 suffering possibly from an over enthusiastic start. JAMIE HUTCHINSON (497th in 58.33) recovered having lost a shoe in the mud to finish just ahead of PHIL CHAPPELL (501st in 58.45). MORGAN WILLIAMS provided back up in 601st place (63.33). 679 took part.
The ILKLEY HARRIERS team finished 47th of the 60 teams who managed to finish 6 counters for the team score. However, 147 clubs were originally entered ; hence 87 clubs failed to turn out 6 men or just did not turn up! Well done, Phil!

Chris Porritt and Amanda Parnaby were first ladies team: run 1 mile together, split to run different 20 mile legs; then rejoin to do the last 8 miles together!

Ilkley Harriers helped organise this event, and many Junior Harriers ran in it (for their Primary Schools).

The Ilkley Harriers Runner of the Month for December is Vince Gibbons.

Well done to everyone who ran, but we need a better turnout at the next 2 races!

Back to normal now, formal sessions are ...

Bernie Connor organised three Harriers teams in the Nidd Valley Great Ringway Relay, a friendly relay organised by Nidd Valley Road Runners, with some 30 teams this year. On the first, ladies-only, leg we had new member Cath Porritt, chased in by Shirley Wood, and Ros Blackburn. After that it's a litttle less clear (to me, at least ...) On the 2nd leg we had Paul Wood, and Howard Allen. On the third leg, Graham Pearce went off like a rocket - Andy Sarah and Bernie Gibbons in his wake. On leg 4, from Harlow Carr. we had Jamie Hutchinson, Norman Blackburn, and Bernie Connor. And on the final (glory) leg, Nick Pearce, Keith Wood and Andy Sumner running in an Ilkley vest for the first time and gaining two places. Ilkley had 6th, 23rd, and 28th teams.

The relay raised over £320 for the Bilton Conservation Group for the upkeep of the route including the Gorge which has had work done recently - new mesh over the duckboards etc.

3M from Silsden - locals Graham Pearce and Kay Pearce (in her first race ever!) were 4th and 32nd respectively.