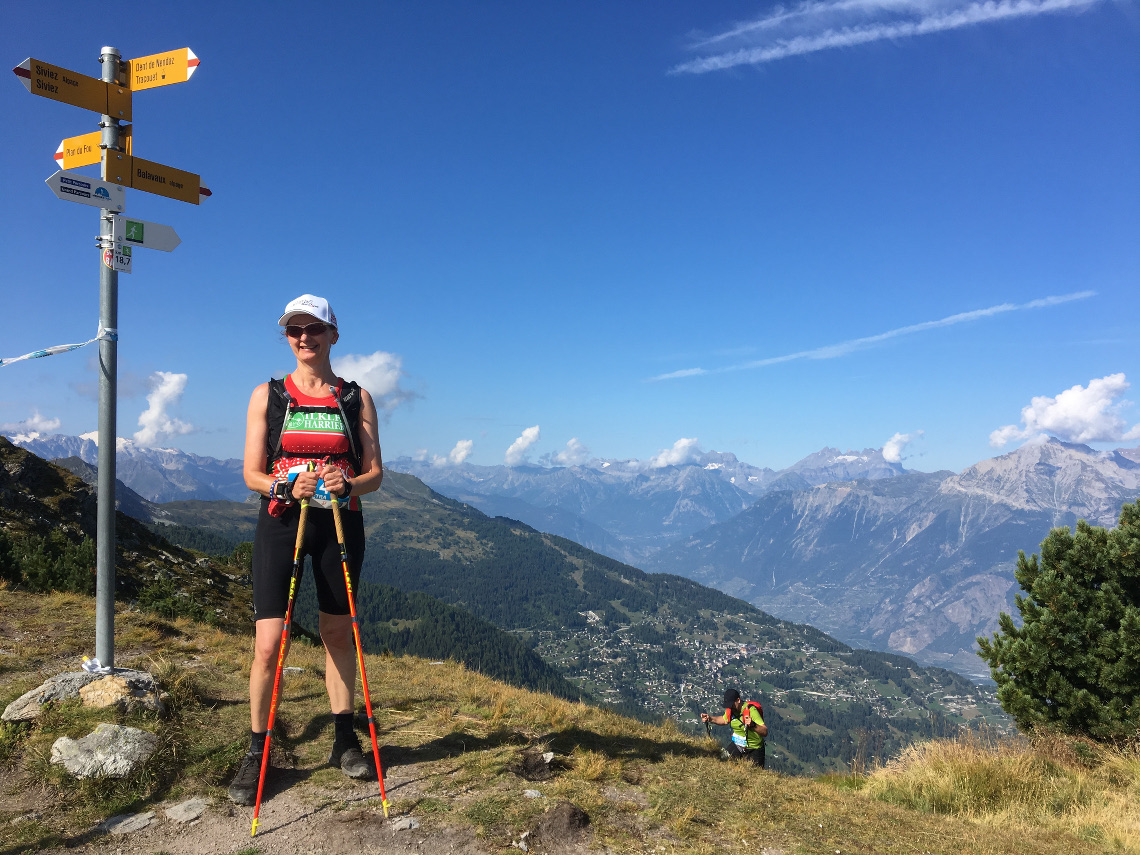 From Petra Bijsterveld... The Nendaz Trail 'Petit Parcours' is a 30 km mountain trail race from Haute-Nendaz in the Valais region of Switzerland taking in 5,820 ft of ascent. Other distances on offer are 17 and 70 km. Starting out under a bright blue sky from the ski resort Haute-Nendaz (1300 m) we took 9 km to climb to the highest point of the race, le Basso d'Alou at 2337 m, descended, climbed a bit more to just over 2000 m, and descended again. The last 8 km were spent running back along the 'bisses', ancient small artificial waterways carved into the mountainside. The footpaths alongside these are fairly level, which should have made for easier moving, but I found the endless tree roots and small rocks a challenge for my two left feet which by now were a little tired, and I managed to go flying in the last mile resulting in a bloodied knee and elbow but no worse. Once we reached more even ground I had enough energy left for a determined sprint on approaching the finish to just gain a couple of extra places. When you are at the back end of a race you have to cherish the small triumphs!
This was my second Alpine race this summer and again I had a fantastic day out, with such a friendly atmosphere amongst the runners, lots of helpful volunteers, great feed stations along the way (cheese, bananas and cola rule OK for me!) and a lovely bowl of pasta at the end.
Results ...

From Jonathan Turner ... There were ideal conditions at the latest Evensplits 5k at the Brownlee Centre - with the winning time of 15:32 just two seconds off the event record and solid runs again from the Harriers contingent.
Results ...

A win for Jack Wood we hear, and Helen Wood well up in the results. More soon. 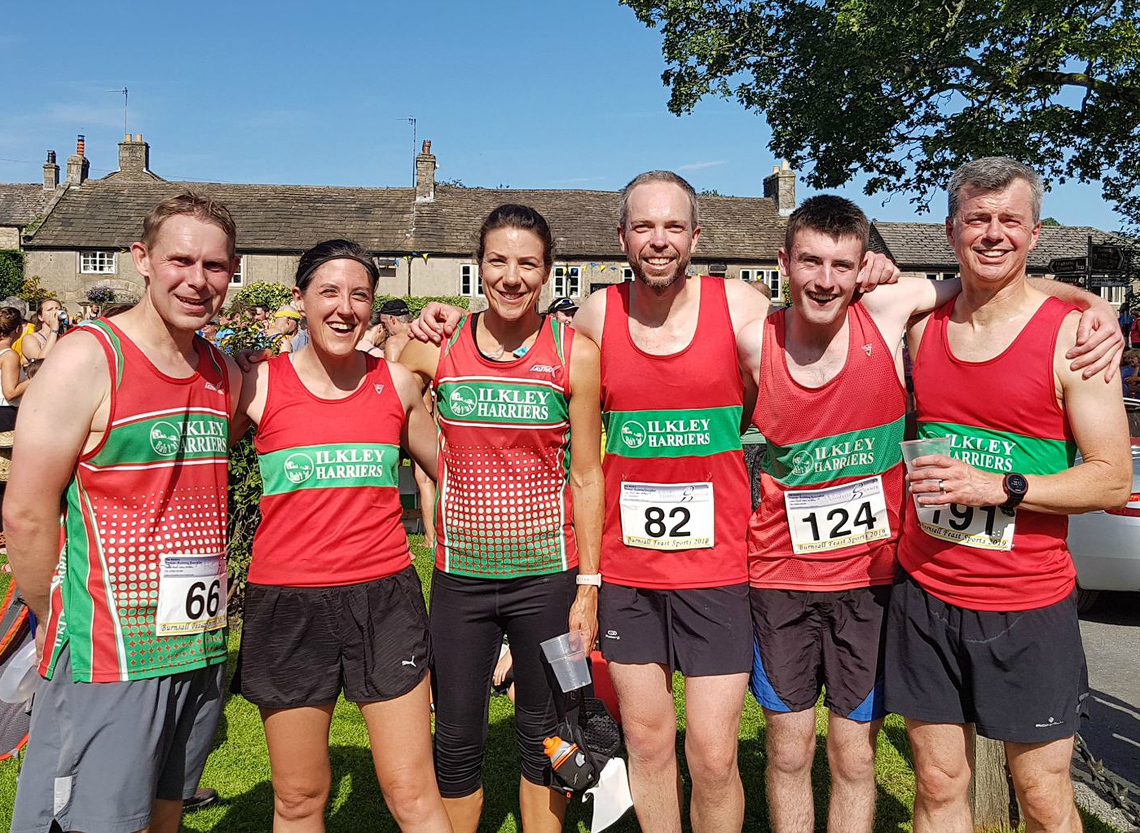 From Dan McKeown ... Ilkeston RC's 'Double or Quit' race offers a choice of one, two or (for the first time this year) three 5-mile laps of Shipley Country Park in the blazing late afternoon Bank Holiday Saturday sun. In keeping with the faintly sadistic concept behind the race, all finishers received a packet of crumpets.
So long as you're within the time cut-offs, you don't have to decide whether you're continuing or quitting until the end of each lap. Having resisted temptation twice, I came second overall in the 15-mile event, sufficiently far behind the winner that he could probably have toasted his crumpets on the bonnet of his car and eaten them before I arrived. This was, however, good enough to secure the rather blingy vet MV40 trophy and a voucher for Derbyshire Runner.

From Alison Weston... I went to a traditional Lakeland fair in Torver on Sunday which had a fell race to the top of Coniston Old Man - a lovely route up but sadly no views due to mist.
The winner was Tom Simpson from Ambleside in 47:27 minutes in a small field of 40 runners and I was 31st (5th lady) in 1:10:23.
Highly recommended race! 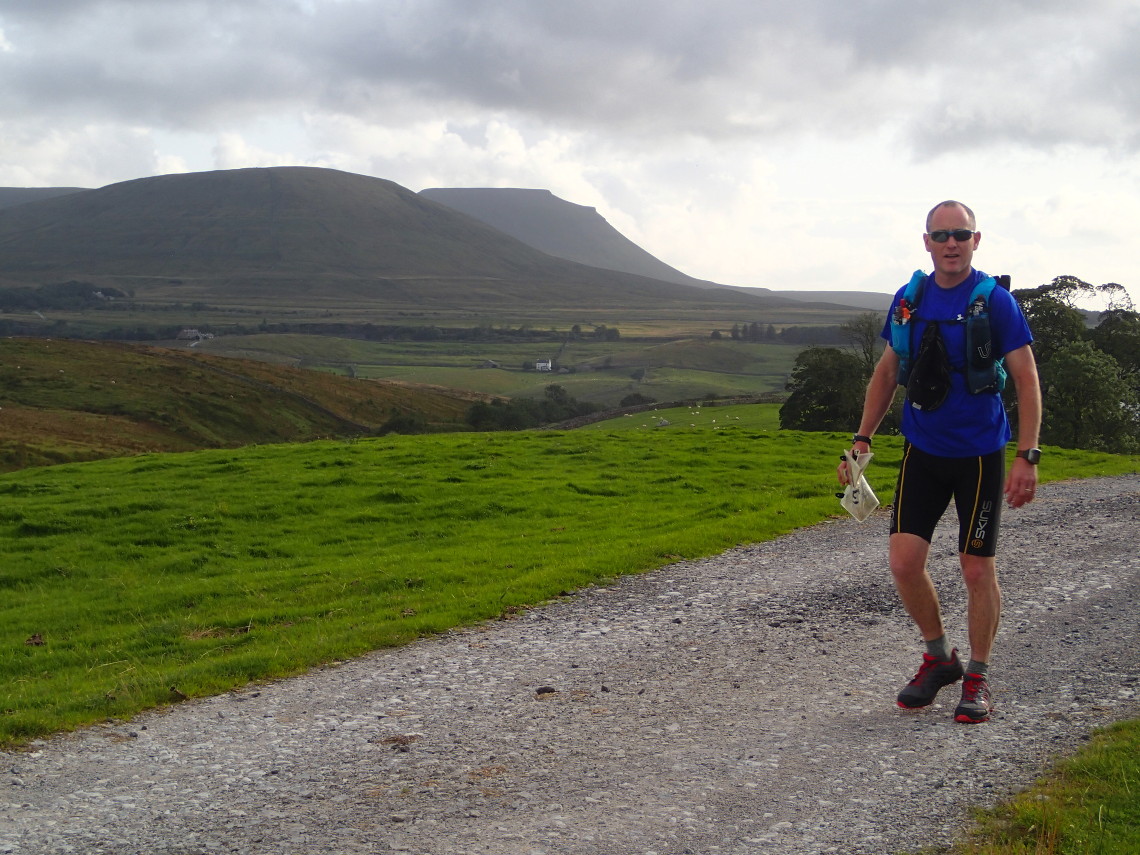 From Adrian Hall ... An 82 mile ultramarathon to celebrate 50 years of the Dales Way. A challenging run from Bowness-in-Windermere back to Ilkley with aid stations every 9 - 12 miles and a gear drop at 40 miles. About 150 competitors set off from the Lakes. Whilst the going was boggy for large sections, the threatened rain never materialised which made the event more pleasant than expected.
I had wanted to complete the Dales Way for nearly 20 years during which time the length seems to have increased significantly. I was fortunate to have piggy-backed on the IH relay two weeks earlier which allowed a long section to be reccied that I wasn't familiar with - many thanks to the Harriers on Legs 2 and 3 for their patience. After boggy sections it was a relief to reach Buckden and Wharfedale in daylight having passed one of the trickier sections. I finished along with friend, Mike Bottomley in 20 hrs 5 mins having completed nearly 83 miles, with no navigation errors. It was a relief to survive with nothing more than a couple of blisters.
Results ...

From Andrew Merrick ... the opportunity to run the Dales Way with logistical support and a finish location which made for an easy journey home was too good to miss.....
Organised by the local ultra organisers Punkpanther, we were coached to the start from Ilkley Tennis Club, with a vaguely civilised 6am departure allowing plenty of faffing time in Bowness prior to the 8:30 start time. I was slightly concerned I might not see my drop bag again as I stuffed it in the back of an estate car along with everyone else's - approximate 200 in total I think!
The race itself started about half a mile up the hill from the lake - ie the actual start of the Dales Way - which did make for early stile queuing.
The checkpoints were pretty well stocked although not the largest I have come across, with a couple being small gazebos, and only the drop bag checkpoint (and the end) offering hot drinks. At this station, although there was only just room to swing a compeed, there was a very wide range of hot food options, which numbered more than the available chairs. Our "chef" seemed slightly disappointed with my choice of a plate of baked beans.... ("you lot have strange appetites") I couldn't fault the level of support we received from all the volunteers along the way. A thank you also to the other runners' support teams who were well organised in finding appropriate locations to cheer us on and offer support.
A couple of small navigational errors, despite the GPX file provided by Punkpanther, my incompetence not theirs; their file even included the sections off the Dales Way to the various checkpoints which was helpful additional reassurance.
As Adrian mentioned we were very fortunate with the weather having swerved the heavy rain of Friday at the cost of some very soggy going in places.... wet feet is not the best for long distance running, but my feet survived better on this run than my previous outing in Devon. I spent much of the run with Chris Smith having got chatting about 25 miles or so into the route. We were both glad of my local knowledge over the last 20 miles of the route as we headed back to Ilkley in darkness - a moonlit Wharfe will be an abiding memory of that section. At the end, to prove we had completed the full route we had to go past the Tennis Club to the official finish of the Dales Way at the Old Bridge and then go back to the club to tell the organisers the letter on the sign hung there (Fittingly a "Y" for the end of the Dales Way). I bumped into Adrian as I headed home after a quick cup of tea at the finish tent outside the tennis club entrance, and offered to show him where the Old Bridge was - he very politely indicated he knew.......
Overall, a well organised race and a great opportunity to run our local ultra footpath with friendly, enthusiastic support. I understand there is a plan to do it again next year. Give it a go - what's the worst that could happen?! 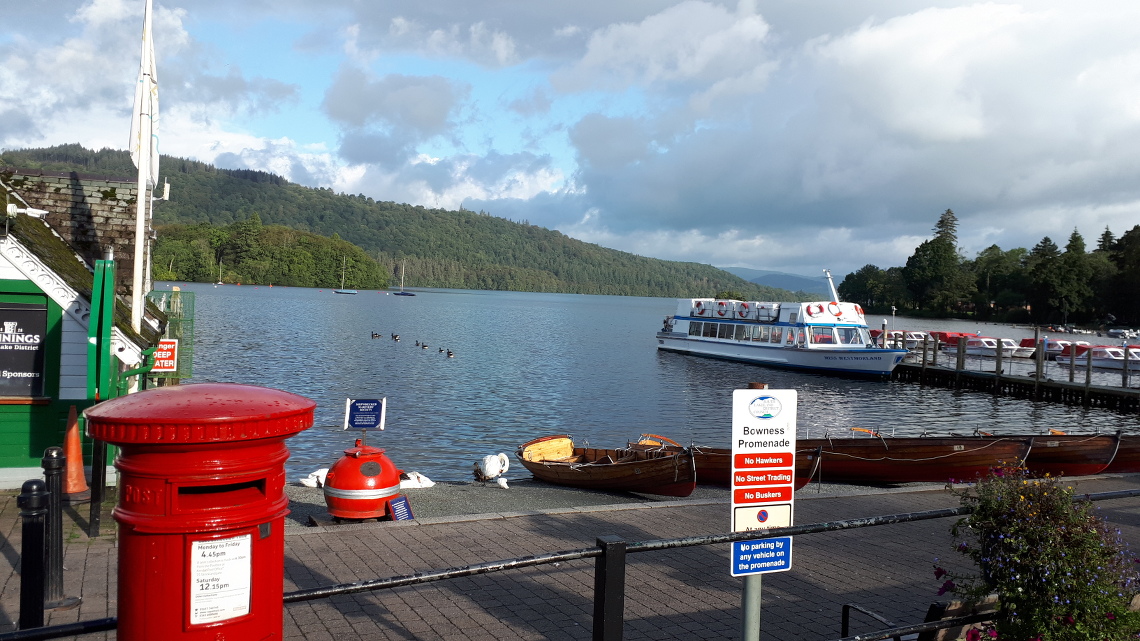 From Sally Armitage ... This was my 4th trip to Podium 5k in Barrowford for yet another bid for a personal best over the 5k distance. 4 and 3/4 laps of a totally flat cycle track. The wind was not anticipated and definitely made it more challenging, I was joined by Euan Brennan and Mark Iley. Euan put in a stonking performance for 3rd place in the 'A' race, Mark and myself were also pleased with our performances in the 'B' race.
Results ...

From Gavin Lamb ... 39km Didn't spot any more Harriers here, sorry if I missed you! First time I have ever seen one of the competitors stub out a cigarette on the way to the start line (he beat me I think!) - only in France!

From Petra Bijsterveld ... Hilda Coulsey claimed the age category record at Portrush this Saturday and came top of the age grade table! Well done Hilda! Tom Worboys found himself in Frankfurt but had some problem finding the parkrun venue. Not easily deterred he still ran even though he had arrived well after the start!
Results ...

From Caroline Howe... The club was pleased to be able to support Sue Ryder Manorlands in hosting a new 5k and 10k race at Bolton Abbey, with a team of 8 of us going along to marshall on the day. The event was a big success, and adds to the Sue Ryder calendar of runs which also includes another series at Bolton Abbey in November and the Solstice Saunter in June. Well done to the Harriers who took on the tough route on a hot morning, and thanks to Petra, Jayne, Nicky, Istvan, Mike, David and Sue for helping out - a lovely morning out!
Results ...

From Sally Armitage... A 5 mile hilly road race in Birkenshaw hosted by West Yorkshire Fire and Rescue Service and Bradford Airedale Athletics Club. I ran this race 2 years ago so knew the course (albeit it was slightly tweaked this year), which has a total of 400 metres on the 'flat' and a brutal 1 mile climb to the finish. I was super happy to be 1st lady and much to my delight there was another Harrier there too, Robin Nicholson, who came 2nd out of the Fire Service runners. It's a nice small field and chip timed.

From William Buckton... Organised by Borrowdale Fell Runners the Borrowdale Fell Race is one of the classic Lake District races. Starting from the village of Rosthwaite the route takes in 27km of the roughest terrain in the Lakes including Scafell Pike and Great Gable, and with 2,000m ascent it is right up there with Wasdale and Ennerdale. It was a hot day on Saturday and I was happy to get round and survive the scree descent from Scafell Pike!

From Jayne Norman ... After an absence of 6 years, we held a relay run along the Dalesway from Bowness on Windermere to Ilkley, a total of 81 miles.
Starting at 5am, and completing by 8:30pm carrying a rock as a baton along the way. Everyone enjoyed their leg/s running through beautiful countryside and amazing views. Followed by a few social drinks in the Vaults after. Hopefully this has helped revive this relay and many more years of running to come.
Thank you to all runners that took part, it is much appreciated to allow this great Relay to take place again. Watch this space for details of next years run, a great event that any in the club can take part in, fast and slow runners alike. It really is a run for all, and the more on each leg the merrier.
More pictures can be found on our facebook page.