Harrier of the Month, January

The HoM awards went to Jane Bryant and Steve Coy. Congratulations to them. They will receive technical running shirts from HoM sponsor UP & RUNNING.

Paul Stephens reports ... Kelly and I had a good run on leg 3 of today's Pennine Bridleway relay, completing it in about 1hr 10 and gaining about 4 places. It could have been a disaster as I took the wrong road in Haworth and we ended up nearly in Colne before doubling back. But we made it and even had time to stand around, have a chat with Steve Weston and get cold before Paddy and Neil came in - leg 2 was the longest leg but they both looked in good shape. It was a hard start to our leg - a long uphill slog, but after that a lot of flatish running round the base of Studley Pike and through Mankinholes. There was a sting in the tail at the end with a steep uphill out of the valley bottom before a quick descent down the track to the changeover and a handover to Rachael and Amanda. I couldn't keep up with Kelly on that final descent. A satisfying run, and a lift back to the car from a couple of Wharfedale Harriers.

From Alison Eagle: 55th team overall out of 104 starters, overall time: 6.28, think we were about 7th mixed team but our sheet had not arrived before we left. Winning team was 4.49 - Salford Harriers, Ladies winner - Calder Valley, Mixed - Accrington Road Runners

Nicki and I felt we had a good run at this stage in the season, very cold but clear day with ice on the paths. We were steadily catching teams and managed to get round with no mistakes, which was pleasing as we were unable to recce and at times there were signposts pointing and paths in all directions. Not sure if I would agree with the course directions when they claim the views are good from the highest point of the Mary Townley Loop, Rowley Moor Top, perhaps we were not in the right frame of mind after the two mile uphill slog, as horrid as it sounds!
Well done to Mark Mon-Williams, who not only got a team out when he was not taking part but correctly predicted our change over time, virtually to 1 minute! He must be onto a winner at the next Club Handicap race and Richard's bottle of wine!!
From our leg changeover it seemed well organised, esp the signs showing the route through the houses and back allies to the finish. Free tea and coffee was provided for all at the finish and a nice warm school to sit in and use the faciities, results were out quickly helped by dibbers being used.

Paddy Hagan says: Leg 2 was as painful as I remember the last time I was dragged (sympathetically) round it. It starts gently enough but (as with leg 3 by the sound of it) gets tough at the end when you could really do without it, including a couple of rotten "hands on legs" ups before a final helter skelter descent. Welcome words of encouragement from Neil were met with increasingly desparate responses from me ("yes, but I'm dead"). Overall we seemed to just about hold ground as we gained on some and lost on others - with a few pairs remaining enticingly close, but not close enough for my sore legs to catch. (According to the provisional results we gained 8 places - I really can't remember that happening).

Just under 400! youngsters ran, results on the Junior Pages.

It was another super Presentations Evening, with some 90 people enjoying a curry supper, socialising, and dancing 'til late. Thanks to Jacqui Weston the organiser; to Piccolino, Dobson & Robinson, and Neil for the prizes for the Grand Raffle; and to the ILT&SC café-bar staff for all their hard work.
See the photos in next week's newsletter ...

The winners of the Ilkley Harriers Race League were also announced:

Full results on the the Ilkley Harriers Race League page.

Henry Heavisides reports ... Today's Brass Monkey was again very popular with Ilkley Harriers. Conditions were very good with no wind, slightly milder temperatures than we've had recently and a fast flat course. Steve Coy managed to pip Steve Weston on the line for the honour of being first Ilkley runner to finish. Jane Bryant was paced by Andrew Merrick to her first ever sub 90 minute half marathon. Jane also won the prize for 2nd F40 & received a bottle of champagne from Andrew so it was a good day for her. I was content to nurse my sore hamstring around the course 3 minutes slower than last year, but was still able to win the M55 prize. All finishers received a smart technical running top.
Mark your diaries for next year (but entries filled up in less than 4 hours this year). 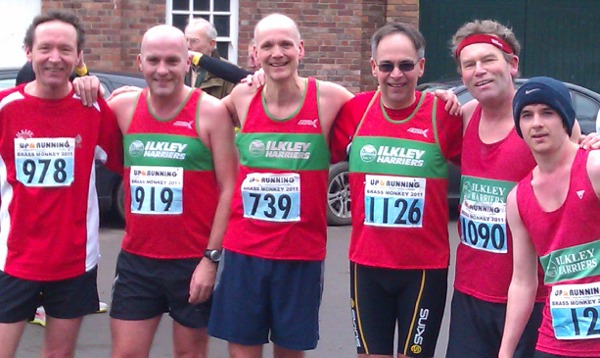 Stephen Coy adds ... As ever a fast course – good weather but deceptively breezy when exposed (on way back in) – results below on chip times and PB for me and I am sure others too: Winner Paul Martelletti was nearly 4 mins ahead of 2nd place in 1:05:21 !! Full results at ukresults.net

From Steve Weston ... This race is quick but is not exactly flat and there is a steady incline on the way back from the lollipop, to say nothing of two overbridges. I started off steady and managed to settle into a group of strong runners. Struggled with the breeze in the last few miles and faded int the last half as Stephen Coy passed me on the last bridge. A good performance all round with 10 Harriers under 90 minutes, including Jane Bryant who gets a well deserved place in the UK rankings. 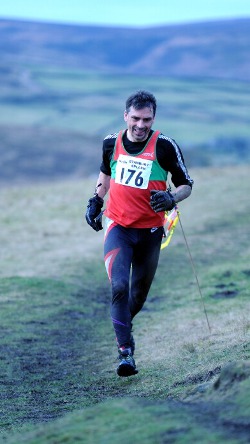 Dave Wilby reports ... in an effort to maintain motivation during the long dark days of winter training, a change of scenery & a new race seemed like the ideal solution and so it was that I made my European(!) debut at the weekend. The race of choice was Ticknock, part of the Irish Winter League (more details at www.imra.ie), which coincided ever so nicely with my next door neighbour's trip home for the weekend, and Ryanair's January sale. So it was that we both caught a Friday night flight out of Leeds/Bradford, and lined up in a frost covered forest just south of Dublin on Saturday morning with 228 other like-minded individuals. The route itself was interesting and varied, definitely falling in to the 'trail' rather than 'fell' category, but a very good mix of technical natural trails, fire roads & man-made singletrack. A group of 4 of us made an early break, and after the first couple of technical sections we were down to 3, with the Irish Ultra Running international & Adventure Racer Eoin Keith leading the way. Me and my neighbour Liam of Otley AC (boo, hiss) traded the minor places a few times before his superior reserves of Guinness & his mum's home cooking paid dividends, and he broke the elastic. I couldn't get back on, and as he chased Eoin all the way in to finish 2nd by just 6secs, I came home 19secs further back for 3rd place, and over 2 minutes clear of the next finisher. A good weekend all round, sealed with a training run around the Slieve Bloom hills, and a few Jamesons nightcaps for good luck.
Everyone was very welcoming, and very pleased to have a couple of 'outsiders' adding to the competition. It's a developing scene in Ireland and if you feel the urge, I can't recommend it enough.
1 43:58 Eoin Keith
2 44:04 Liam Dunne
3 44:23 Dave Wilby

Rachel Cunningham was 57th in 29:58 at Lister Park

The theme of this week's social Gathering was RELAYS. There was a overview of the Relay racing opportunities available (lots of them! see our Relay Page), some recommendations on which ones to do from Captains and relay veterans, a bit of reminescing from those who have done them, and a discussion of how we promote them and how we encourage/select runners. See the Forum note.

Malcolm reports - results of the 3rd Peco race, with any luck we should have pulled some points back! Full results on www.pecoxc.co.uk

Amandy Parnaby reports on this EYLDWA event, 25 miles and over 3,000 ft of climb. Starts at Scalby on the Whitby Road then into Scarborough, along the sea front, out over Oliver's Mount and out into the countryside around Hackness, Forge Valley and Burniston. Windy but mild day. Finished back at Scalby in 6 hrs 40 mins.

Pete Shields reports ...I have been managing/coaching the Northern Counties XC squad. We had an inter area match in Cardiff over the weekend and I took a mens and ladies team to compete. Local interest to us in the ladies team was Jo Buckley latterley of Calder Vally and now Bingley, she came into the team after a good showing in the Yorkshire X/C's and finished a really strong 5th in a quality field. These squads are also used for developing athletes, giving them the opportunity to experience elite competition. Ilkley's Tom Adams was given the opportunity to run following the withdrawl of an athlete from the initial team. Tom conducted himself very well and certainly earned his North vest, he finished 26th, again in a very strong field, it was great to see Ilkley Harriers getting some representation at this level.

Dave Taylor braved fresh snow and ice to complete the postponed Hexhamshire Hobble. This is a 10.5 mile category C fell race over Hexhamshire Common from Allendale Town in Northumberland. Beautiful blue skies gave great views to spectators who made it up on to the fell, but competitors were mainly looking at their feet with sheet ice leading to many falls. This was the third year that this historic race has been organised by the Allen Valley Striders and the first year it has been dedicated to the memory of local fell-running hero Angus Tait. Organisation was smooth, with quick results, supportive and efficient marshalls, no route-finding difficulties and superb (free) tea and cakes in the school afterwards. Despite a strong field with several local clubs using the race as a counter in their leagues, the atmosphere at the front and the back of the field was uniformly friendly. Results:

Ralph Tench reports ... surprisingly good day on the Welsh Fells in cold, wet and quite miserable start to the year. However came 5th out of field of 80, picking up the MV40 first prize, in 41:32