Kettlewell (Skirfare) Half Marathon - Sat 29 May

This was the second race in the Due North Trail Race Series, a challenging course of just under 14 miles with 900m of ascent divided over 3 main climbs. Starting and finishing at Hawkswick Cote beside the river Skirfare, runners are 'eased in' by the side of the river along the flat to Arncliffe, to be faced with a steep ascent virtually perpendicular to the contour lines, followed by a grassy, somewhat boggy, and then very stoney descent into Starbotton. The course continues along the side of the hill to Kettlewell, leaving the village the route goes quite steeply up once more but the reward is a long grassy descent, a bit of flat road running and some nice fields back to Kettlewell. One final long and steep uphill to tackle before the finish field finally comes into view.

It was the first warm and sunny day for a long time which no doubt added to the physical effort required, but it did lift the mood for everyone I am sure, and it was so nice to be able to sit on the grass afterwards with one's clubmates (socially distanced of course) eating a well deserved plate of pasta which was laid on by the organisers.

This is the third year this race has been held (previous editions in 2018 and 2019) and the old course record of 1 hour 54 was comprehensively demolished today by Tom Adams who romped home in 1 hour 36, a full 10 minutes ahead of Wharfedale's Ted Mason who came 2nd. Excellent Harrier performances at the pointy end with 4 runners in the top 10! Nice to meet Joe Morrell and Jack Gribbin who both joined the club just before lockdown last year, Jack told me this was the first outing for his Harrier vest and it may well have been the same for Joe, they both ran excellent times.

For me, aside from the running which was ace, the next best thing about the event was being able to hang out with some fellow Harriers at an event again. Thanks also to those who had come out to support and offer encouragement out on the hills. I hope I have not missed anyone off the list, as the clubs were not listed on the results.

Plenty of Harriers travelled to the Brownlee Centre and Dan McKeown led them home with his 17:38. Just pipping him for the best Ilkley age-graded time of the night was Sally Malir's 21:56 (80.6%). 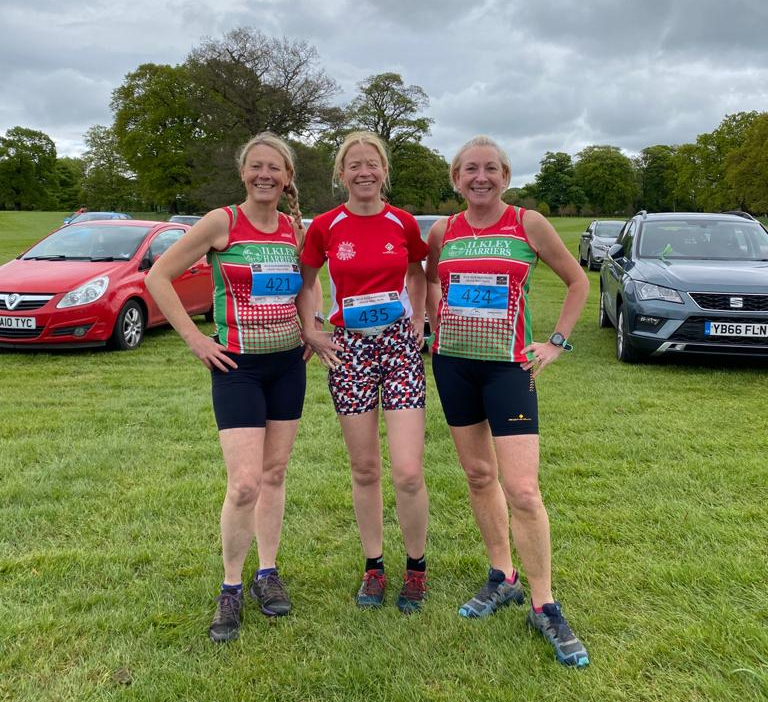 Fortunately, the wet and windy conditions had subsided substantially by the time the first socially distanced eight runners took their positions on the start line at 7.00pm. 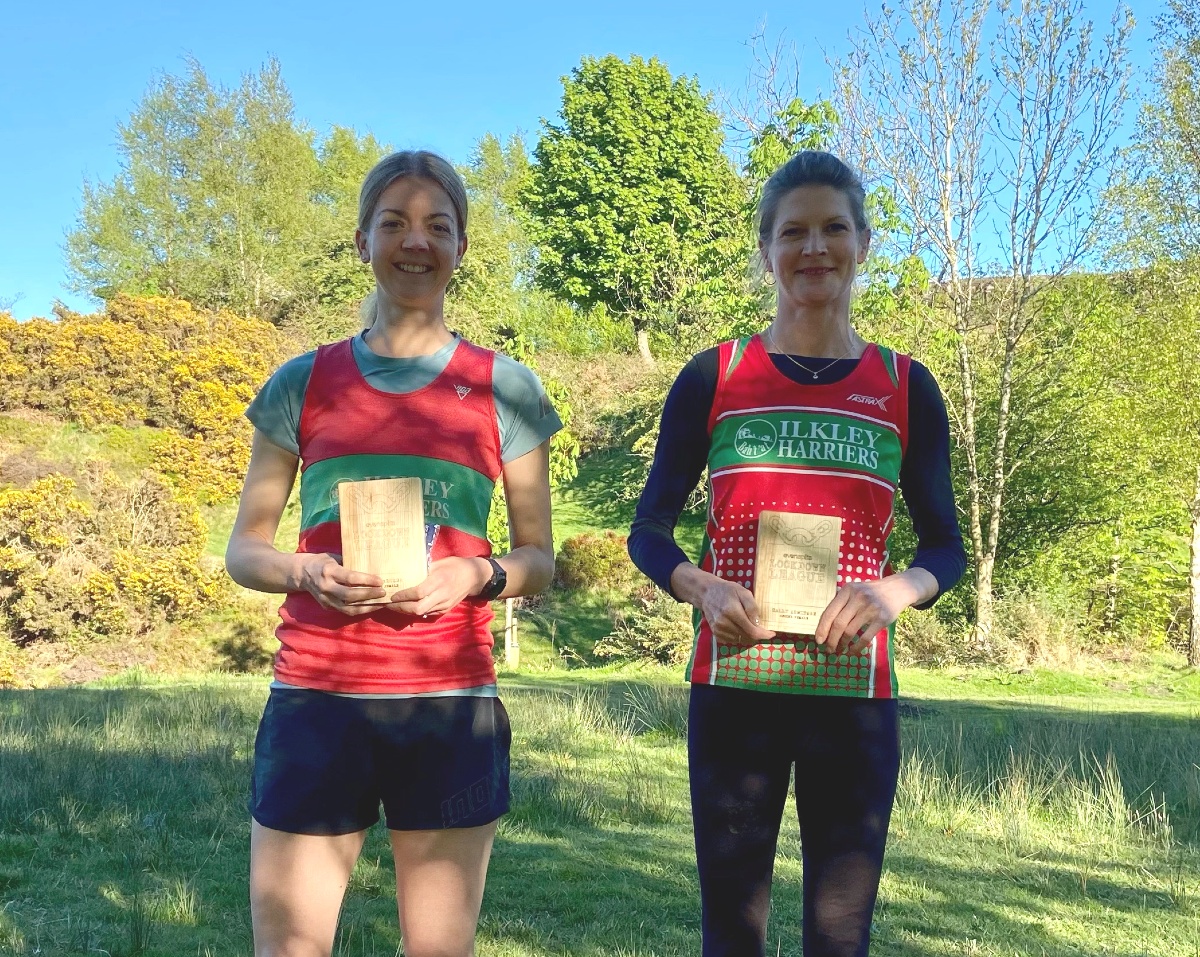 The latest easing of Covid restrictions this week allowed the long-awaited presentation to the Harriers as winners of the EvenSplits 'Lockdown League'. Over 30 clubs from across Yorkshire and beyond competed virtually across a range of distances and challenges during February and March. No fewer than 25 Ilkley runners took part over the eight weeks, with Kate Archer and Sally Armitage leading the way. They dominated the ladies standings with scores of 500 and 499 points respectively (out of a max of 500!) to put the Harriers in pole position for the team prize. Everyone who ran contributed to us finishing on 3,906 points, over 200 points clear of second-placed Valley Striders. 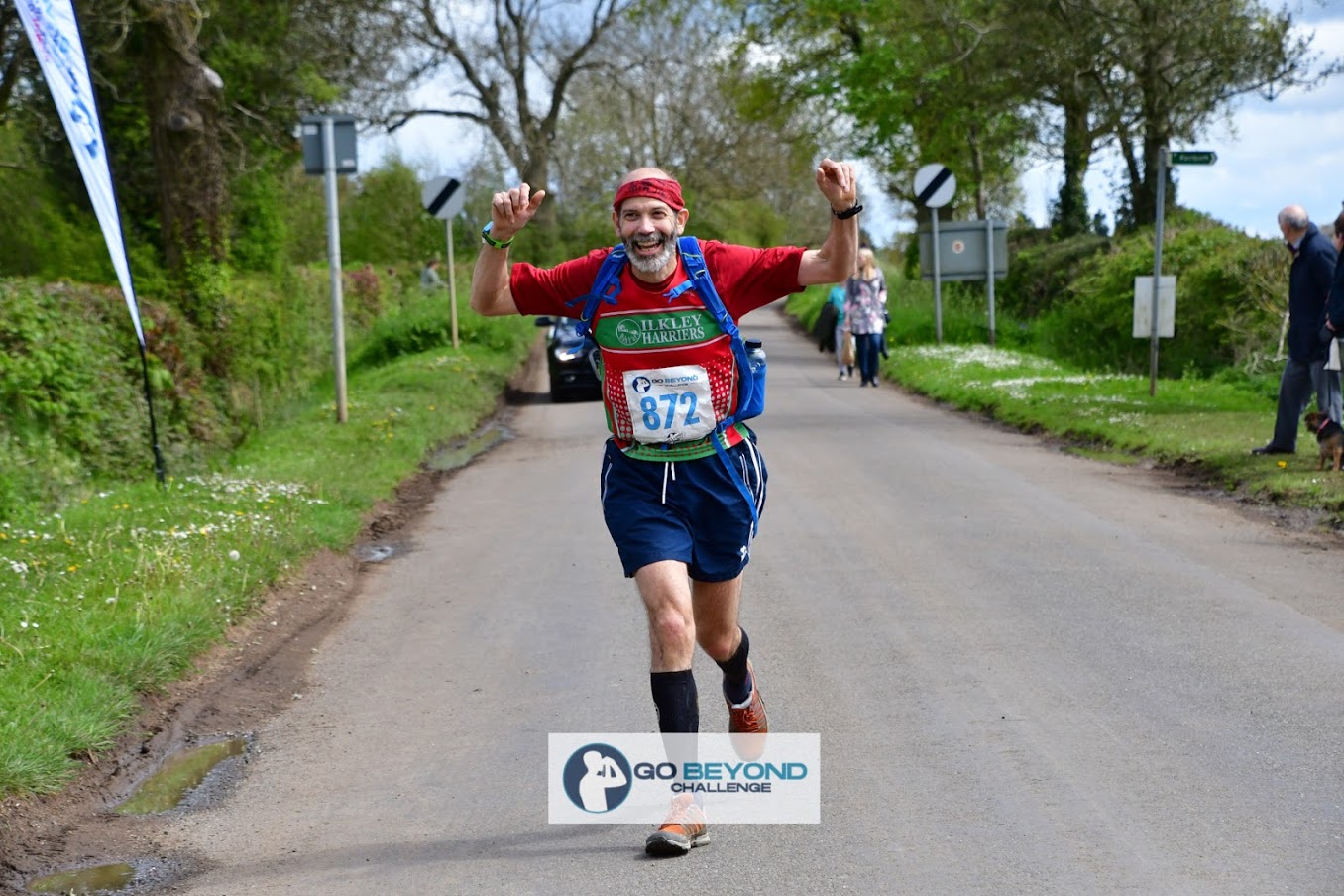 The Shires & Spires Ultra is a 35mile circular route starting and finishing in Naseby, a mixture of road running and muddy trails across farmland, with lots of gates and stiles to contend with.

I'd originally intended to try it in 2020 before Covid19 put a stop to that.

In addition to the 227 taking part in the ultra, runners taking on the 10k, half marathon and marathon all started three at a time in a staggered start, therefore it was very difficult to tell during he race how you were doing compared to other runners. 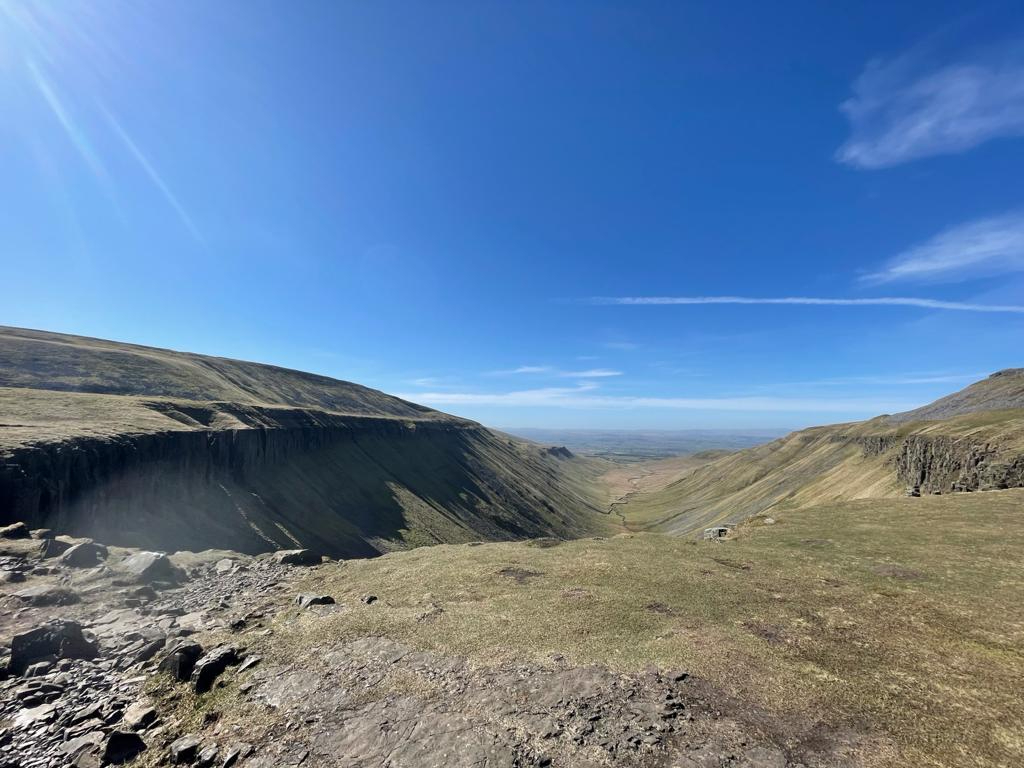 The vast majority of the training runs and recces that Jane McCarthy and I did in advance of last weekend’s adventure took place in good weather.

As the training turned to tapering, the weather forecast for 8 May suggested the dry spell had ended. It was right….

After a lot of kit faffing preparation in the preceding days, we set off just before 8am from Saltaire on our journey to Appleby, both muttering “it wasn’t even raining when I got up this morning….” part of a small field who could set off at a time of their choice within a generous window.

Heavy rain accompanied us on our journey although it had largely subsided by the time we got to Settle (via Addingham, Skipton, a very blustery Sharp Haw, Hetton, Weets Moor and Malham). At Settle unbeknownst to us we met the designers of the route, and I was also slightly stunned to learn that Feizor is pronounced “Fazer”. The Punk Panther team had a range of well stocked check points staffed by a great team whose enthusiasm was faultless. We had however made our own plan with my daughter operating our first 4 stops, handing over to Andrew McCarthy at the aforementioned Feizor, where Elaine’s was a refuelling stop for both of them as well as us. In case of interest, refuelling for us consisted of Tailwind (which Jane has now converted to), many bananas, with nakd bars for me, and a range of attractive sandwiches and wraps for Jane. We lost enthusiasm for our recce favourite of hot cross buns!

Our personal support crew did a fantastic job (a huge thank you to Andrew and Sophie) supplemented by other supporters along the way (thank you Paul, Alison, Jean, Richard, Dick and Helen). We had seen a forecast suggesting 50 mile an hour winds on the top of Ingleborough but happily it was pretty calm with good visibility when we summited. I celebrated with the traditional face plant as we headed back down towards Chapel le Dale knowing we were pretty much halfway and had dealt with the majority of the climb and those messy steps….

Somewhat earlier than intended, I went into fast walk mode from here along the most beautiful section of our route as we headed over to Dent, with head torches required as we hit a rough descent down into our next stop after a brief section of the route shared with the Dales Way. From here it was a shorter section to Sedbergh (a section we were both glad we had recce’d since the route took us on a steepish climb up onto the moor before dropping back down into the book town (surprisingly short of coffee shops we had previously discovered one Sunday morning). The rain re-joined us for the night section over the Howgills, which was tough going on indistinct paths, but Jane did a great job of watch based navigation on the higher slopes and we eventually started to feel a consistent downhill gradient, before seeing the welcome sight of Andrew and the VW van just near Newbiggin. We were both very impressed that Ryk (Mr Punk Panther) Downes had been up on the Howgills earlier putting out large direction arrows in key spots although we were slightly surprised by the direction of his last arrow….. [This mystery was later solved when we found out that the arrows for a different race altogether and one of our gang had unfortunately followed that last arrow into the wrong valley….].

After the challenge of the Howgills, we only had two shortish legs left between here and Appleby, the 90 mile mark and the finish of the race for most. These two legs hadn’t been recce’d so full navigation concentration was required over an eerie misty moor with very strangely shaped trees. We kept moving through the mist and had a brief stop with the dawn chorus as daylight and dry weather returned in Great Asby before heading out on the least enjoyable leg to our first finish in Appleby. This final/penultimate leg of our journey featured a lot of fields with long wet grass, not great for keeping feet dry (one of us having stuck with the same pair of shoes since the start). However, we swerved what could have been a couple of messy navigational errors and found ourselves finally heading down into Appleby on a nice dry bit of road!!

Ryk had organised a 90 (aka 92) mile version of the run, which used the entire length of the Dales High Way, and for those wanting to do a full 100, he had added an additional “10” (aka 14) mile loop up over High Cup Nick and back to Appleby.

We stopped long enough in Appleby for a (porridge pot) breakfast and we were also happy to see another Ilkley Harrier, Ritchie Williamson who had finished a little earlier. We were then relatively soon back out on our way somewhat slowly up to High Cup Nick, only four of us made this additional journey. Fortunately we had recced this with Ryk a couple of weeks earlier (on a gloriously sunny day), so we knew what to expect. The double finish line was mentally challenging but we kept each other going as we finally reached the far end of the cup which signalled a downhill run back to Appleby, apart from a couple of additional bits of into the wind climb we had both forgotten about.

We finally arrived back to a dry Appleby a little over 27 hours, 106 miles and 15000 ft of ascent after having started out in Saltaire to a small but still enthusiastic gang for whom we managed a final run to our final finish.

A Saltaire Blonde seemed an appropriate means of rehydration on our journey back home.

A big thank you to all our support, to Ryk and the Punkpanther team, and to Jane for her company on our training runs, recces and on the race itself.

(Punkpanther, based near Otley, organise a range of largely shorter distance friendly ultras in the local area together with some longer distance events. Give them a try!)